Out of Tune, Right on Point

The Twelfth of Never

She looked so frail lying in the bed.  So small.  So helpless.  And looking at her in the bed, I knew this would be her final place.  That room.  That bed. You could tell the bed was originally stained a dark cherry, but it had faded to an ugly brown.  The headboard had so many scratches on it from the numerous people that slept in it over the years.  The bed looked worn and old.

Mom’s journey had been a tumultuous one.  It began in early 2013.  In fact, I remember the date, it was January 13.  It was a Sunday.  The day before, I found out I was expecting baby number 3. and not told anyone but my husband.  I was honestly shocked.  After all, I had just turned 40 the month before.  I had so many female issues, I didn’t think I could conceive any longer.

Mom called me around 2:00 that afternoon.

“I think I need to go to the emergency room.  Something is not right.”

Her speech sounded slightly slurred.  I feared she may have had a stroke.

“I think I need to go to the emergency room.  I don’t feel well.”

She had no recollection of calling me 10 minutes prior.

I got in the car seconds later.  Within 5 minutes, my cell phone rang.  “Honey, I think I may need to go to the ER.  Can you take me?”

Now that is just weird.  She had no recall from contacting me 5 minutes prior.  I knew something was really wrong.

We arrived at the ER within an hour of her symptoms.  They ran several tests.  Not a stroke.  But rather a mini-stroke, or TIA.

She spent a week in the hospital and transferred to a rehabilitation center for physical therapy.

From there, things became progressively worse.  She came home in February and then became very ill and went back to the hospital.  On one instance, she stopped breathing and was revived.  She managed to come back home until August of 2013.  She stayed in the rehabilitation center until March 2014.

This entire time, her memory began to fail her more and more.  But she begged to come home.  So we hired private duty sitters to keep her there as long as we possibly could.  We managed to keep her home from March to August.

My beautiful baby girl, who was born in August 2013, just turned one year old a few days ago.

And last week, I put my mother into a nursing home permanently.

While I was completing her admission paperwork, I heard a man singing in the dining room.  I looked in there and saw a group of about 30 elderly ladies in wheelchairs swooning over this gentleman’s voice.

Since my mother had just admitted and she could not get to the dining room before the program was over, I asked the activity director to have the man come visit my mother in her room.

I knew once I got him in there, I could ask him to sing something for her.

He was such a polite man.  Soft-spoken.  And clearly a kind soul to visit the nursing home to sing to the patients.

“Could you sing something quick for my mother?  You see, she just admitted and she has been in and out of the hospital for over a year.  it would really lift her spirits.”

He smiled and began looking for songs on his iPhone.  He wanted background music to accompany him.

“I have the Twelfth of Never.  How is that?”

The music started and he began to sing to my mother.

My mother has never been an affectionate woman.  In fact, she’s a cold and distant person, fearful to show warmth, as it could be construed as weakness.  She raised me well, but I never knew if she really loved me.  She is so guarded.

As this stranger began to sing, I watched her cold, reserved countenance melt away.  She began to weep because it was so beautiful.

His singing was beautiful.

But more importantly so was his kind gesture.

And as I stood and watched this for myself, I was overcome with emotion.

What a gift I had been given.  To have this moment with my mother.

To have this memory of my mother.  To see her shed her guard and weep.

All from a stranger we had never met before that moment, that gave of his time and of his heart.

And when mom passes on, I will be able to think back to that scene and know in my heart that she knew at that moment how much she is loved.  That she understood, even if for a minute, that she could be vulnerable and still be strong.

I hope she will be able to keep this in her memory.  Some days are better than others.

I know I will hold on to the beauty of that moment for the rest of my life.

And to my mother…

You ask how long, I’ll love you
I’ll tell you true
Until the twelfth of never
I’ll still be loving you 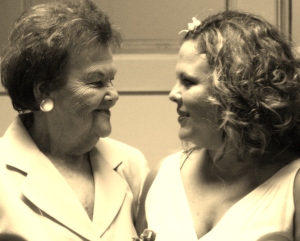 A little of this and a little of that. Optimistic Southern lass trying to juggle kids, a job and a new relationship with grace and patience. Music nerd. Curator of archives of useless information. Southern linguist and translator for those born elsewhere. Former sandwich generation expert, happy to share my experiences to help others.

2 thoughts on “The Twelfth of Never”

What's On Your Mind? Cancel reply